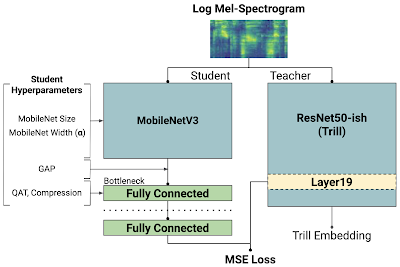 Representation learning is a machine learning (ML) method that trains a model to identify salient features that can be applied to a variety of downstream tasks, ranging from natural language processing (e.g., BERT and ALBERT) to image analysis and classification (e.g., Inception layers and SimCLR). Last year, we introduced a benchmark for comparing speech representations and a new, generally-useful speech representation model (TRILL). TRILL is based on temporal proximity, and tries to map speech that occurs close together in time to a lower-dimensional embedding that captures temporal proximity in the embedding space. Since its release, the research community has used TRILL on a diverse set of tasks, such as age classification, video thumbnail selection, and language identification. However, despite achieving state-of-the-art performance, TRILL and other neural network-based approaches require more memory and take longer to compute than signal processing operations that deal with simple features, like loudness, average energy, pitch, etc.

In our recent paper “FRILL: A Non-Semantic Speech Embedding for Mobile Devices“, to appear at Interspeech 2021, we create a new model that is 40% the size of TRILL and and a feature set that can be computed over 32x faster on mobile phone, with an average decrease in accuracy of less than 2%. This marks an important step towards fully on-device applications of speech ML models, which will lead to better personalization, improved user experiences and greater privacy, an important aspect of developing AI responsibly. We release the code to create FRILL on github, and a pre-trained FRILL model on TensorFlow Hub.

FRILL: Smaller, Faster TRILL
The TRILL architecture is based on a modified version of ResNet50, an architecture that is computationally taxing for constrained hardware, like mobile phones or smart home devices. On the other hand, architectures like MobileNetV3 have been designed with hardware-aware AutoML