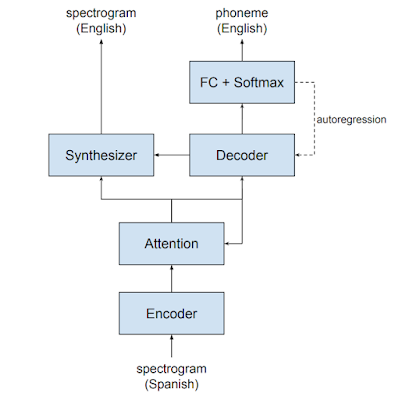 Speech-to-speech translation (S2ST) is key to breaking down language barriers between people all over the world. Automatic S2ST systems are typically composed of a cascade of speech recognition, machine translation, and speech synthesis subsystems. However, such cascade systems may suffer from longer latency, loss of information (especially paralinguistic and non-linguistic information), and compounding errors between subsystems.

In 2019, we introduced Translatotron, the first ever model that was able to directly translate speech between two languages. This direct S2ST model was able to be efficiently trained end-to-end and also had the unique capability of retaining the source speaker’s voice (which is non-linguistic information) in the translated speech. However, despite its ability to produce natural sounding translated speech in high fidelity, it still underperformed compared to a strong baseline cascade S2ST system (e.g., composed of a direct speech-to-text translation model [1, 2] followed by a Tacotron 2 TTS model).

In “Translatotron 2: Robust direct speech-to-speech translation”, we describe an improved version of Translatotron that significantly improves performance while also applying a new method for transferring the source speakers’ voices to the translated speech. The revised approach to voice transference is successful even when the input speech contains multiple speakers speaking in turns while also reducing the potential for misuse and better aligning with our AI Principles. Experiments on three different corpora consistently showed that Translatotron 2 outperforms the original Translatotron by a large margin on translation quality, speech naturalness, and speech robustness.

Translatotron 2
Translatotron 2 is composed of four major components: a speech encoder, a target phoneme decoder, a target speech synthesizer, and an attention module that connects them together. The combination of the encoder, the attention module, and the decoder is similar to a typical direct speech-to-text translation (ST) model. The synthesizer is conditioned on the output from both