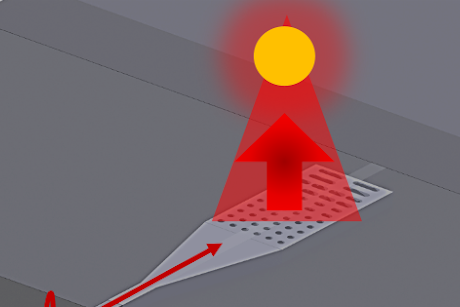 In work that could someday turn cell phones into sensors capable of detecting viruses and other minuscule objects, MIT researchers have built a powerful nanoscale flashlight on a chip.

Their approach to designing the tiny light beam on a chip could also be used to create a variety of other nano flashlights with different beam characteristics for different applications. Think of a wide spotlight versus a beam of light focused on a single point.

Most instruments for doing this, known as spectrometers, are relatively large. Making them much smaller would have a number of advantages. For example, they could be portable and have additional applications (imagine a futuristic cell phone loaded with a self-contained sensor for a specific gas). However, while researchers have made great strides toward miniaturizing the sensor for detecting and analyzing the light that has passed through a given material, a miniaturized and appropriately shaped light beam—or flashlight—remains a challenge. Today that light beam is most often provided by macroscale equipment like a laser system that is not built into the chip itself as the sensors are.

Enter the MIT work. In two recent papers in Nature Scientific Reports, researchers describe not only their approach for designing on-chip flashlights with a variety of beam characteristics, they also report building