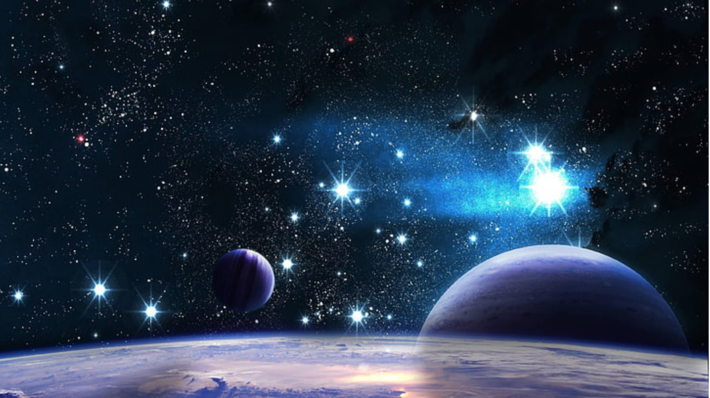 These Fourier series can be considered as bivariate time series (X(t), Y(t)) where t is the time, X(t) is a weighted sum of cosine terms of arbitrary periods, and Y(t) is the same sum, except that cosine is replaced by sine. The orbit at time t is 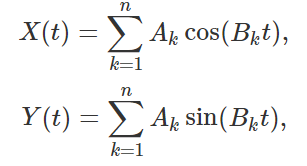 where n can be finite or infinite, and Ak, Bk are the coefficients or weights. The shape of the orbit varies greatly depending on the coefficients: it can be periodic, smooth or chaotic, exhibits holes (or not), or fill dense areas of the plane. For instance, if Bk = k – 1, we are dealing with standard Fourier series, and the orbit is periodic. Also, X(t) and Y(t) can be viewed respectively as the real and imaginary part of a function taking values in the complex plane, as in one of the examples discussed here.

The goal of this article is to feature two interesting applications, focusing on exploratory analysis rather than advanced  mathematics, and to provide beautiful visualizations. There is no attempt at categorizing these orbits: this would be the subject of an entire book. Finally, a number of interesting, off-the-beaten-path exercises are provided, ranging from simple to very difficult.

The orbit is always symmetric with respect to the X-axis, since Y(-t) = –Y(t).

We are interested in the center of gravity (centroid) of n planets P1, …, Pn of various masses, rotating at various speeds, around a star located at the origin (0, 0), in a two-dimensional framework (the ecliptic plane). In this model, celestial bodies are assumed to be points, and gravitational forces between the planets are ignored. Also, for simplification, the orbit of each planet is circular rather than elliptic. Planet Pk has mass Mk, and its orbit is circular with radius Rk. Its rotation period is 2π / Bk. Also, at t = 0, all the planets are aligned on the X-axis.  Let M = M1 + … + Mn. Then the orbit of the centroid has the same formula as above, with Ak = Rk Mk / M for k = 1, …, n.

None of the above examples is realistic, as they violate both Kepler’s third law (see here) specifying the periods of the planets given Rk (thus determining Bk), and Titius-Bode law (see here) specifying the distances Rk between the star and its k-th planet. In other words, it applies either to a universe governed by laws other than gravity, or in the early process of planet formation when individual planet orbits are not yet in equilibrium. It would be an easy exercise to input the correct values of Ak and Bk corresponding to the solar system, and see the resulting non periodic orbit for the centroid of the planets.

The Riemann hypothesis is one of the most famous unsolved mathematical conjectures. It states that the Riemann Zeta function has no zero in a certain area of the (complex) plane, or in other words, that there is a hole around the origin in its orbit, depending on the parameter s, just like in Figures 1, 2 and 3. Its orbit corresponds to Ak = 1 / k^s, Bk = log k, and n infinite. Unfortunately, the cosine and sine series X(t), Y(t) diverge if s is equal to or less than 1. So in practice, instead of working with the Riemann Zeta function, one works with its sister called the Dirichlet Eta function, replacing X(t) and Y(t) by their alternating version, that is Ak = (-1)^(k+1) / k^s. Then we have convergence in the critical strip 0.5  <  s  <  1. Proving that there is a hole around the origin if 0.5  <  s  <  1 amounts to proving the Riemann Hypothesis. The non periodic orbit in question can be seen in this article as well as in figure 4.

Figure 4 shows the orbit, when n = 1,000. The right part seems to indicate that the orbit eventually fills the hole surrounding the origin, as t becomes large. However this is caused by using only n = 1,000 terms in the cosine and sine series. These series converge very slowly and in a chaotic way. Interestingly, if n = 4, there is a well defined hole, see figure 5. For larger values of n, the hole disappears, but it starts reappearing as n becomes very large, as shown in the left part of figure 4.

If n = 4 (corresponding to three planets in section 1 since the first term is constant here), a well defined hole appears, although it does not encompass the origin (see figure 5). Proving the existence of a non-vanishing hole encompassing the origin, regardless of how large t goes and regardless of s in ]0.5, 1[, when n is infinite, would prove the Riemann hypothesis.

Note the resemblance between the left parts of figure 3 and 4. This could suggest two possible paths to proving the Riemann Hypothesis:

Here are a few questions for further exploration. They are related to section 1.

To receive a weekly digest of our new articles, subscribe to our newsletter, here.