Python vs. Ruby: Which one is best for Artificial Intelligence? 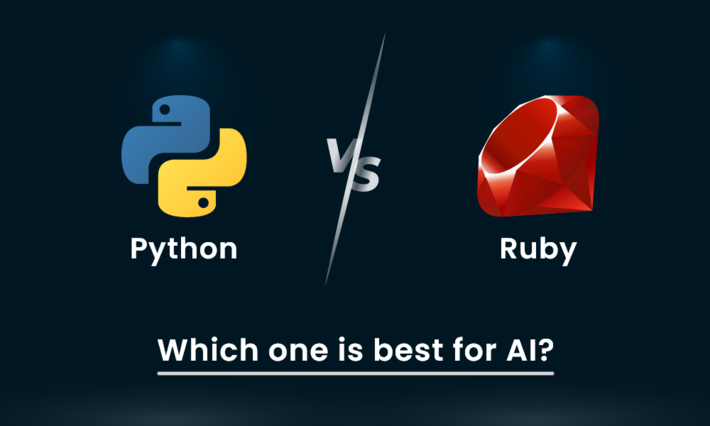 The concept of artificial intelligence is no fiction anymore, like in the Terminator movie. The concept has got real and is seeing massive adoption across various industry sectors. Thanks to AI app developers around the world, we are able to see a lot of automation in the world today.

Not just Robotics, AI has also affected the app market. One great example of an AI app is Spotify. The app automatically suggests music based on your choices.

The functionality of an AI-powered app is unique, quick, and of high utility. This is the reason AI is being used more in applications. Moreover, the market of AI is also racing towards an overall size of $309.6 billion by 2026. This means that there is more to come.

The base of this ground-breaking technology is Python. Python is a programming language (not a snake!!) that has all that you need for an awesome AI application. Some of you may argue, why not Ruby? Well, Ruby is an excellent language in itself, but Python has some unique features that make it ideal for AI. Read ahead to know about those features!

Python Vs. Ruby: A Head to Head Comparison!

Python and Ruby are both excellent programming languages. However, there are some key differences we need you to know before giving a verdict!

Why is Python preferred for AI over Ruby? 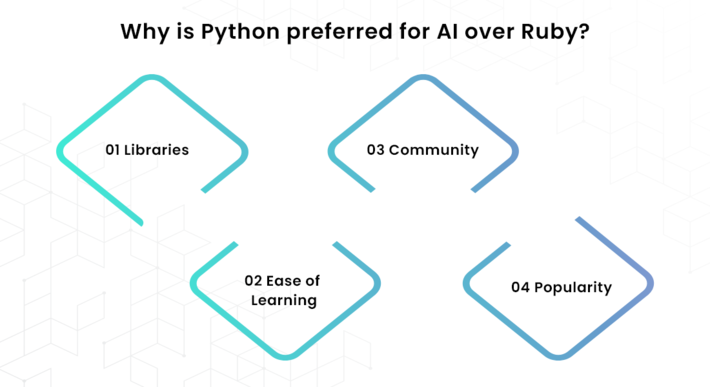 No matter if you are involved in AI app development or any other AI software, Python is the best choice for you. Here are some aspects that rank Python over Ruby! The number one factor that ranks Python above Ruby is the number of libraries. Unlike Ruby, Python is blessed with a vast range of libraries that include:

And many more! These can be used for complex numeric calculations, visualization, image processing, big data analysis, etc.

One more great thing about Python libraries is that they are ready to use for AI and Machine Learning algorithms. On the other hand, Ruby needs to make some changes in its ML and AI libraries to deliver the same results as Python. So, in terms of libraries, Python wins!

AI algorithms are pretty complex and require a lot of focus to develop. In such a scenario, if the programming language also has a complex syntax, development can become a nightmare. Therefore, python offers its developer a syntax that is super easy to learn.

Some will argue that Ruby also has an elegant syntax as it uses simple English words. There is nothing against that but the code syntax of Python is more natural than Ruby. For instance, if you want to display Hello World on the output screen, the syntax will be:

For anyone new to programming, print is a word that is easier to remember than puts. This is why Python is easy to learn.

Ruby gained fame after the development of Ruby on Rails. However, Python was introduced a decade before that. One thing is pretty easy to comprehend from this. As both of them are open-source, Python is surefire to have a larger as well as better community. Its widespread popularity and ease of learning add more stars to its status.

Therefore, if you plan to step into AI, hire a python app developer for your project.

Can Ruby be used for AI someday?

Ruby is not a bad language. It has pretty awesome features and benefits like:

Unlike Python, Ruby is heavily used in developing web applications. Ruby on Rails is an exceptional framework that provides default structures for databases, web pages, and web services using an MVC pattern. These are the aspects it is used by various successful companies like Github, Soundcloud, etc.

However, the lack of some suitable libraries has pushed it back from being used in AI. This does not mean it lacks potential. Some innovative ML libraries have recently been introduced that can make Ruby a potential language for AI in the future.

Which big giants use Ruby?

Python is useful but Ruby is elegant and beautiful. This is the reason it is used by various tech giants around the world.

Crunchbase: It is an excellent website if you want to gain insight into any company in the world. Ruby is the prime language used in its development.

Airbnb: Airbnb is a website for those travelers who like to stay overnight in a house rather than a hotel room. In short, it is a meeting point for travelers and house owners ready to rent their houses.

Fiverr: The website is an online marketplace for freelancers and other working professionals for offering their services to those looking for them.

Other than that, many other firms use Ruby! Here is an image! AI is a growing industry, and it is best for firms to invest a significant amount of time and money now. As the competition is not that hot currently, an early step will surely make you expert python consultants and python development services providers in the future.

As far as the language is concerned, Python can take you years ahead while Ruby becomes fit for AI. Therefore, hire python developer and begin your journey into the AI industry.