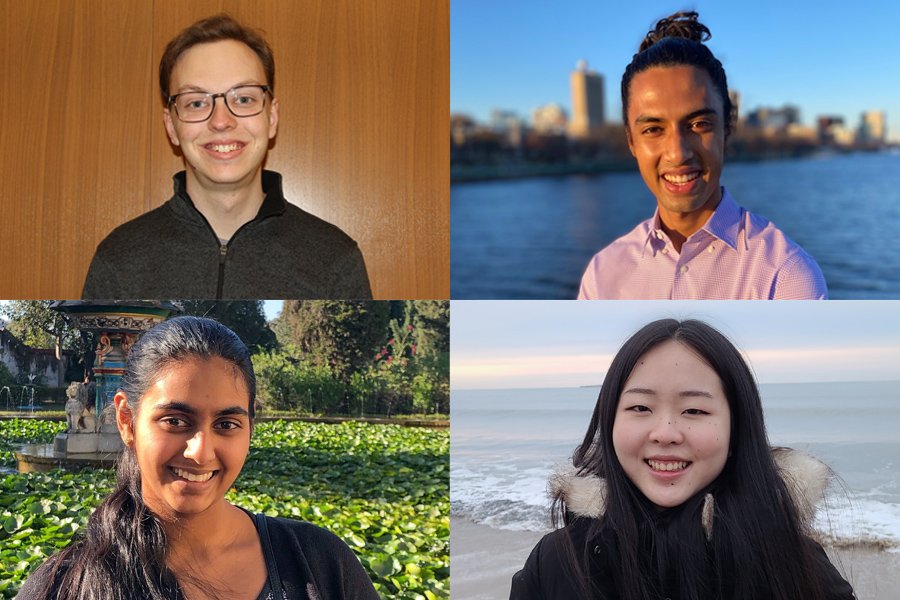 MIT students Spencer Compton, Karna Morey, Tara Venkatadri, and Lily Zhang have been selected to receive a Barry Goldwater Scholarship for the 2021-22 academic year. Over 5,000 college students from across the United States were nominated for the scholarships, from which only 410 recipients were selected based on academic merit.

A junior majoring in computer science and engineering, Compton is set to graduate next year with both his undergraduate and master’s degrees. For Compton, solving advanced problems is as fun as it is challenging — he’s been involved in algorithm competitions since high school, where, on the U.S. team for the 2018 International Olympiad in Informatics, Compton won gold. “I still participate — there’s a college equivalent, the Intercollegiate Programming Contest or ICPC, and I’m on last year’s MIT team that won first in North America,” reports Compton. “We were supposed to represent MIT in the World Finals in Russia last summer, but it’s been postponed due to Covid.” Compton brings his competitive and enthusiastic mindset to his areas of research, including his collaboration on causal inference with the MIT-IBM Watson AI Lab, and his work on approximation algorithms and scheduling with professor of electrical engineering and computer science Ronitt Rubinfeld and postdoc Slobodan Mitrović​.

In her recommendation letter, Rubinfeld, a member of the Computer Science and Artificial Intelligence Laboratory, spoke at length about Compton’s aptitude as a student but she also left a glowing review as to Compton’s character. “Spencer is extraordinarily pleasant to work with. He is kind and caring when he interacts with younger students. I