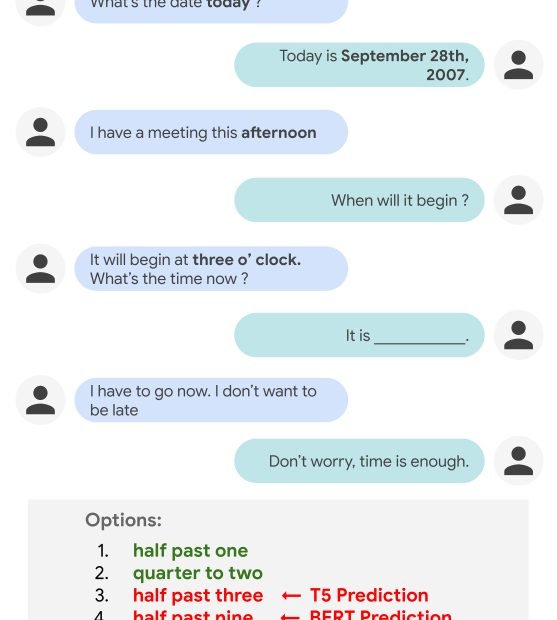 A key challenge in natural language processing (NLP) is building conversational agents that can understand and reason about different language phenomena that are unique to realistic speech. For example, because people do not always premeditate exactly what they are going to say, a natural conversation often includes interruptions to speech, called disfluencies. Such disfluencies can be simple (like interjections, repetitions, restarts, or corrections), which simply break the continuity of a sentence, or more complex semantic disfluencies, in which the underlying meaning of a phrase changes. In addition, understanding a conversation also often requires knowledge of temporal relationships, like whether an event precedes or follows another. However, conversational agents built on today’s NLP models often struggle when confronted with temporal relationships or with disfluencies, and progress on improving their performance has been slow. This is due, in part, to a lack of datasets that involve such interesting conversational and speech phenomena.

To stir interest in this direction within the research community, we are excited to introduce TimeDial, for temporal commonsense reasoning in dialog, and Disfl-QA, which focuses on contextual disfluencies. TimeDial presents a new multiple choice span filling task targeted for temporal understanding, with an annotated test set of over ~1.1k dialogs. Disfl-QA is the first dataset containing contextual disfluencies in an information seeking setting, namely question answering over Wikipedia passages, with ~12k human annotated disfluent questions. These benchmark datasets are the first of their kind and show a significant gap between human performance and current state of the art NLP models.

TimeDial
While people can effortlessly reason about everyday temporal concepts, such as duration, frequency, or relative ordering of events in a dialog, such tasks can be challenging for conversational agents. For example, current NLP models often make a poor selection when tasked with filling in a blank (as shown

previous3 Questions: David Kaiser and Julie Shah on social and ethical responsibilities of computing
nextGoogle Tensor will be available on the new Pixel 6